Her red curls are her out selling point, as well as her great versatility – and Madlen Kaniuth has often proved that. Whether sassy and cheeky in comedy series or as a lascivious-murderous beast in crime thrillers, the native German lives and loves acting.

After Madlen graduated from high school, she was trained professionally in drama, singing and dancing in Berlin (GER) to approach her childhood dream of becoming an actor.

First engagements in which she was able to prove her acting and singing qualities were not long in coming: “West Side Story” (Opera Bonn), “Anything goes” , “On the town” (Staatstheater Oldenburg), “Cats “(Capitol Theater Duesseldorf) as well as several leading roles in musicals and musical galas that went on tour in Germany and Europe.

Besides Musicals, she also played classical theatre roles, boulevard theater and comedy, like she did in four plays at the famous Volkstheater Millowitsch in Cologne.

But Madlen is equally enthusiastic about her work in front of the camera.  She became known in Germany for her series regular role of the lively secretary “Brigitte Schnell” in the German RTL series “Alles was zählt”.

Her international film debut was a supporting role in the Italian film “Le Anime Veloci”. This was followed by the movie “Happy End”, which received very good reviews and awards, especially at many international festivals.

Madlen also was front singer of the German cover bands “80Special” and “Nightliners”.

With her relocation to the US in 2019, Madlen continued acting right away. She played lead and supporting roles in several short films as well as feature films and returned to the theater stage as CASSIE in “A Chorus Line” and was featured in “Don Giovanni” at the Detroit Opera House.

For her role in the US Short film “The Way I See Maria”, she won her first award as BEST SUPPORTING ACTRESS.

Even sporty Madlen is very versatile. She loves to horsebackride since she was a child. In addition to all the “everyday” sports activities such as fitness, jogging, swimming, hiking, etc., Madlen made her windsurfing license a few years ago, as well as her the DGV Golf license. In the Wintertime she love to go downhill skiing.

Charity work is a matter of the heart for Madlen. She is very proud to be the ambassador of Kinderlachen e.V. (GER) and the DKMS.

For dsai e.V., Patients’ organization for congenital immune deficiencies, Madlen did her first synchronization work. In “Immune in the cartoon” she lends her voice to a little girl.

In 2015, Madlen released her book „Dicke Beine trotz Diät”, which was published by mvg Verlag, Germany. It is about the disease Lipedema, which is not very much known yet.  Madlen advocates that the disease receives more attention and education. 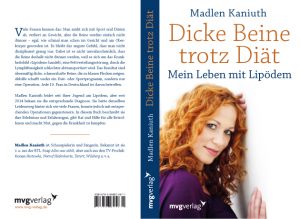